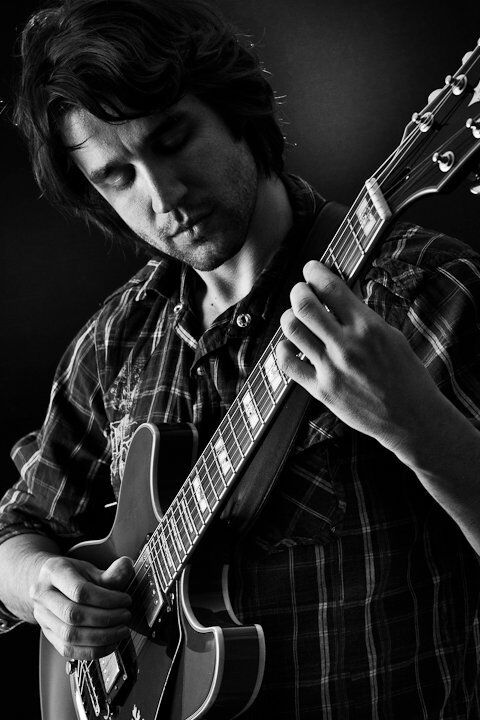 Perreault explains the message in the CD’s title, “La Mince Ligne (The Thin Line) is the frontier between thoughts, ideas, and emotions. There is just a small difference between being well and not being well. A simple step can make you cross this ‘thin line.’ Actually, I navigated a lot on both sides of this line and it has been a part of my life in the last years. La Mince Ligne can also be seen as the small difference that really changes your state.”

He establishes, “I did all the compositions on the album. My inspirations are mainly my emotions, the situations I live, but also the musicians I like, and the sound I want to reach with my music.”

Tertio comes together with Perreault on guitar, Eric Thibodeau on drums, Alex Lefaivre on bass, Andy King on trumpet, and Paul Shrofel on keyboards. As the driving force behind the music and the band, Perreault recounts how he came into this role. “I formed the band six years ago with friends and musicians I wanted to play with. All of them are musicians I have played with on other gigs, and I wanted their talent in my music. I picked the name Tertio, which means ‘thirdly,’ because I was 33 years old when I started the band, and quite a lot of things in my life were gravitating around the number 3! I decided to form a jazz band because that’s the music I listen to when I’m at home or in my car. I dig it, modern, old, standards, fusion, world, and jazz-rock, obviously!!”

The jazz-rock element in Tertio’s music was there from their start in 2015 when they released their self-titled debut recording. Their sophomore release, La Mince Ligne, builds on their debut effort, having accumulated a more extensive library of compositions. Perreault discusses how the band’s newest CD came about due to an outpouring of creative urges. “We had more songs to record, 9 songs in only two days!! This album is also the result of a master I did in composition at the University Of Montreal, so the composition process is probably tainted by these two years of study. But in the meantime, I did compose a lot for myself while exploring new options.”

He examines, “I completely composed the first EP in the studio, and I had a very precise plan when we entered the studio. For La Mince Ligne,” he advances, “we kept a lot of spontaneity and even played a song in the studio for the first time. We did only two takes for [the track] ‘Au Revoir Lea,’ and we kept the second one. We never rehearsed the song before, and it is the pleasant surprise of the album. For the mixing and mastering, I decided to work with my long-time friend Simon L’espérance who is an amazing mixer and understands well my musical vision.”

Another sample of Tertio’s spontaneous artistry is demonstrated in their track “Da Solo.” Perreault reveals about the composition, “‘Da solo’ (‘Alone,’ in Italian) is a track I wrote in the middle of winter after a challenging moment in my life. I was alone in my apartment, and I was feeling empty with a sort of sadness. I think this track is very meditative and reflects the emotion of loneliness I was experiencing at the time. The choice to use the piano for the melody is on purpose because of its ability to be delicate and emotional. I have the privilege to play with incredible musicians who can play anything from heavy stuff as well as beautiful ballads. I presented the songs and explained quickly what kind of mood I wanted. We just played it. It was super simple. Paul Shrofel, my pianist, is playing a marvelous solo on this track and brings a different mood on the album.” 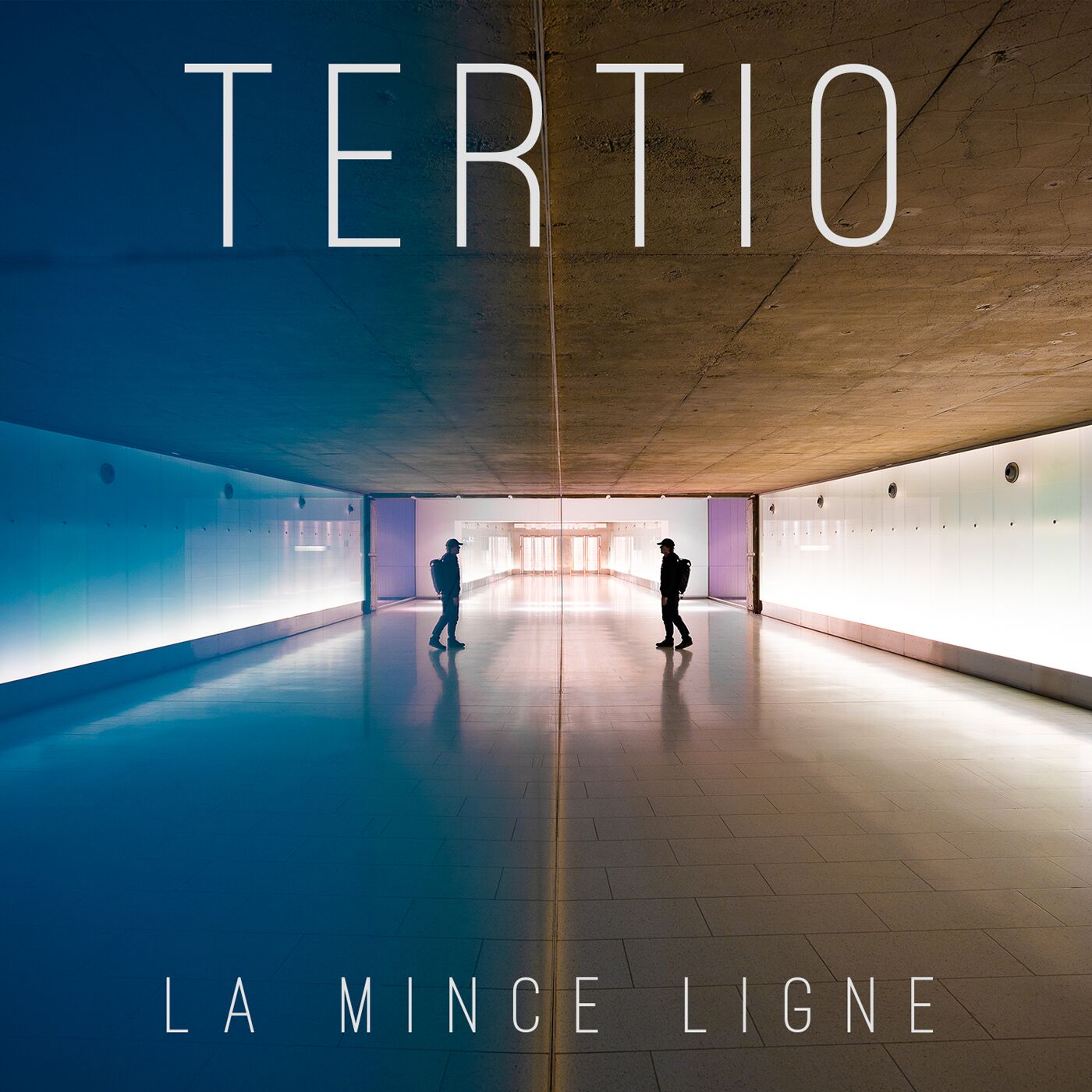 He reflects about the challenges he encountered while recording La Mince Ligne, “As I mentioned, it was part of a scholar project, so my challenge was to sound as organic as possible without going too much on the intellectual side. I think we reached a good balance of complexity versus simplicity while keeping our focus on melodic compositions. The other challenge was to record 9 songs in two days; it was a lot!!”

Perreault’s surge of creativity can also be traced to his experiences working with other musicians. “As a freelance guitarist, I play with a lot of singers, male or female,” he cites. “I could say that my collaborations with them are a true inspiration.”

He imparts, “The human voice is a very communicative instrument, and I’m trying to mimic this behavior in my music. Some musicians I work with are also opening my ears by presenting me to new music, and sometimes I ‘fall in love’ with a new artist, and I listen to their album a lot. They eventually become a part of my influences.”

He considers artists he’d like to work with that have affected him. “A musician I highly respect and admire is Eivind Aarset, a guitarist from Norway who has worked with Nils Petter Molvaer. He has a strong musical identity and a very creative approach to the guitar. He is a master to me, and I would love to work with him one day. Also, I would love to be able to collaborate with singers such as Gretchen Parlato and Gregory Porter. Their voices are just splendid, and they are inspiring musicians in their own style.”

Like his influences, Perreault is attracted to a wide range of jazz-fused mixtures. He recalls why he chose to play jazz music from the beginning. “The freedom given by the improvisation, and the interactions between the musicians is important and is a vital part of jazz music. I do like to play blues and pop, but I prefer the colors given by the jazz harmony as well as the freedom to explore.”

He reminisces about his youth, being touched by music. “As a teenager, I was listening to a lot of classic rock like Led Zeppelin, Jimi Hendrix etc, through my father’s vinyl collection. Later I had a guitar teacher who introduced me to blues like Stevie Ray Vaughn, Albert King, Eric Clapton, etc. I started to listen to jazz with a Joe Pass album titled Virtuoso. It blew my mind; his playing was so rich and full of virtuosity. It’s still one of my favorite jazz albums!”

He recollects, “A big influence in my early years as a music student is John Coltrane. His music changed my life and the way I approach interpretation. Coltrane can play complex things over a simple form and always keep it musical and tasty. He also reinforced the idea that the blues is an important language to learn if you wanna play jazz.”

Moving beyond being a listener of jazz, he describes the series of events that led him to jump in and play music. “I did start around 12,

playing with friends at school. A year later, I started guitar lessons and never stopped. What I like about the guitar is that there is a lot of different styles you can play with it, whether it’s folk on an acoustic or jazz on a hollow body or pop on the electric. It’s still the same six strings but with a different feel and tone.”

He shares about himself, “I like to make albums. Going into details and having control over your sound is something purely magical. After a while, you can get tired of trying to hear all of the details and micro-details that only you can notice.”

“Making an album is exhausting too,” he regards, “but so rewarding. I’m not the type of guy who can only do studio. I need and love to play live. This is where we take risks, try new things, and where we can fully experience the freedom of jazz. Sometimes on a night, my playing is just ok, and the other night I’m on fire, and this is the same for every musician, so it’s always full of surprises when we play live. Playing live is also a good place to try new songs and see what the reception from the crowd is.”

As the driving force behind the band and their music, Vincent Duhaime Perreault keeps Tertio spontaneous on stage and in the studio. Perreault has shown that he is just beginning to explore his creative urges. Discovering the essence of spontaneity, Perreault embraces the experience of playing an active role in making music and performing with other musicians. He partakes in the building process of channeling and expressing thoughts, feelings, and ideas into music, and sharing that part of himself with audiences.