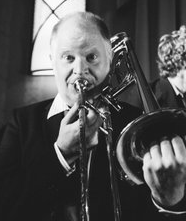 Trombonist, guitarist, composer, and bandleader Curtis Hasselbring has found a vehicle by which his music will continue to be fresh sounding, innovative, and relevant in contemporary times. The vehicle is his band Curha-chestra, featuring a rotation of musicians that keep his works evolving by finding creative minds to reimagine his directions with each incarnation.

“The Curha-chestra is a very long-term project,” he substantiates, “wherein I have experimented around with different instrumentations with the idea of playing my electronic music with mostly acoustic instruments.”

He earmarks, “I have been doing this for about 20 years, and various alumni include Andrew D’Angelo, Ches Smith, Brian Drye, Tim Keiper, Brandon Seabrook, Ron Caswell, Tim Monaghan, Tim Lefebvre, Shane Endsley, and many others. The current version contains two bass clarinetists, both of whom appear on the last record, Alec Spiegelman and Peter Hess.”

The project’s name Curha-chestra is comprised of Curtis Hasselbring’s nickname “Curha” and the contributions of the musicians who make up his orchestra or “chestra” for short. Hasselbring’s input is not only as the bandleader, composer, and arranger on the project, but he also contributes trombone parts. A heavy toned brass instrument that often makes a prominent sound in recordings, though few trombonists are ever known more than side players in jazz ensembles.

“I started playing the trombone after the 5th-grade band teacher suggested that I have good lips for playing a low brass instrument,” supporting, “such was my destiny!”

“Around 9th grade,” he remembers, “I realized that I had some natural ability on the trombone and enjoyed playing it, so I took it seriously. Was also into classical guitar, but that had nothing on playing jazz trombone. I go through phases with my philosophy about the trombone — like it, love it, tolerate it –but ultimately it is a super-expressive instrument that sounds great in a variety of genres, from rock and roll to brass quintets.”

Another unique quality about Hasselbring is his source of inspiration when composing and arranging music. Compared to composers and 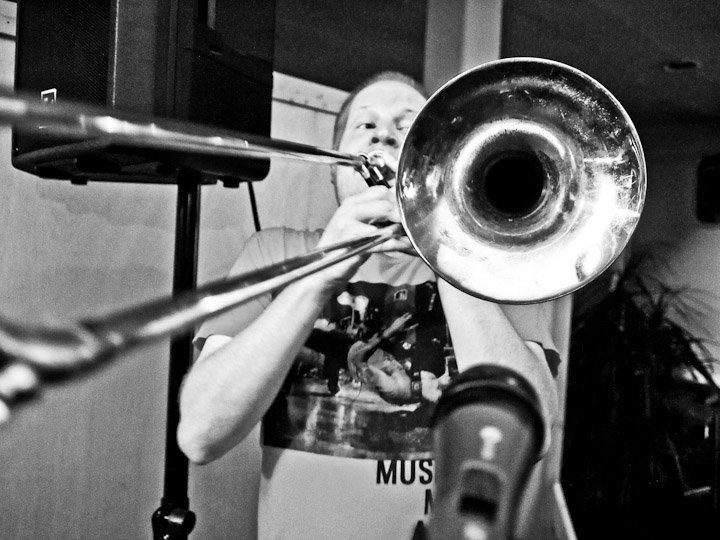 bandleaders who look to their musical influences to guide them, Hasselbring operates differently, opening himself up to learning from musicians that he works with and discovers, some of which have been his own children.

“I started a trombone trio with two of my three kids,” he prides. “They are young, but it is fun to take things back to the basics. I just arranged ‘Cantaloupe Island’ for us to play.”

Imagining “Cantaloupe Island,” the iconic jazz standard written by Herbie Hancock, in Hasselbring’s hands with his children would present an innovative adventure through the track. That’s jazz, personalizing one’s parts in the exchange of communication, exploring one’s own voice, and making new discoveries.

He imparts about the composing process, “Many years ago, my goal was to unlearn everything I learned in music school. I have, perhaps,” he observes, “matured since then, and sometimes reluctantly embraces everything I learned in music school. I definitely learned what I could from some great teachers, totally missed the boat on appreciating other great teachers that I had access to, and had many formative experiences playing with other music students that were on similar paths. Most of what I got out of music school over the years, though, is the relationships with musicians that I still know and play with.” 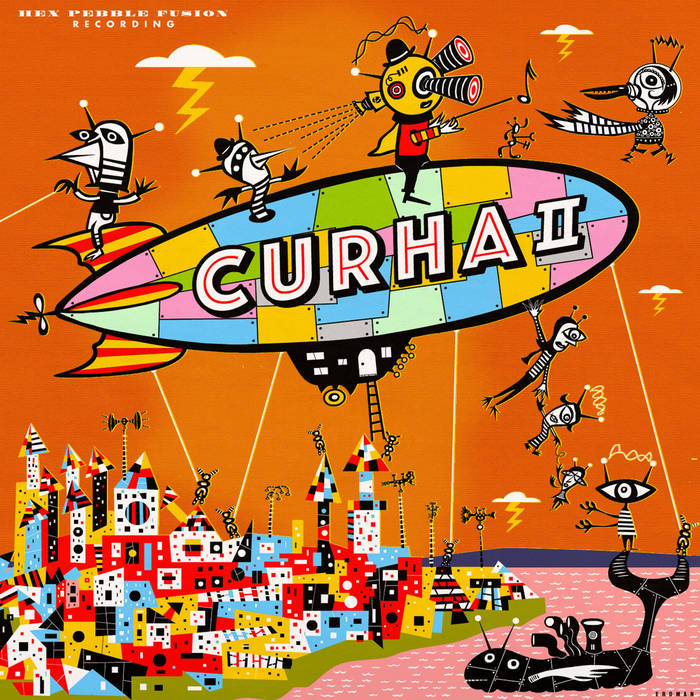 Building relationships with musicians is Hasselbring’s means of keeping his vehicle Curha-chestra mobile. His latest recording with the Curha-chestra is entitled Curha II, the followup to their Curha I release. Hasselbring examines the elements that separate the two releases. “Curha II is a bit more deliberate in terms of creating a recording from the bottom up. Curha, I was more of a ‘best of what I have been up to over the last several years.’ I am not sure what’s up with the roman numerals for titles, outside of my longstanding appreciation of classic rock — Zeppelin, Chicago, Queen, and many more did the same thing. I suppose it is freeing to not have to worry about words conveying an overall sense of what the recording is supposed to be about.”

With all original compositions written by Hasselbring, tracks like “Murgatroid” on Curha II have a fresh sound as he singles out, “‘ Murgatroid’ is a very old tune of mine. 2000?” he estimates. “It sounded like a dated disco soundtrack from the ’70s to me, so I went with that sound, organ, disco drums, flanged guitar, to go further with the orchestration approach.”

Curha II contains a plethora of musical styles from the esoteric soundscapes and pivoting beats of “Casa Grande” to the digital coordinates mapping out a zigzagging matrix along “Hex Pebble Fusion.” Hasselbring ascertains, “Any sideman/band situations I am in are always learning experiences. I love recording in studios and find myself paying as much attention to the recording process as I do the performance aspect of being in a studio situation.”

The fundamentals which Hasselbring developed to hone the creative process are rooted in his music education. To quote his biography online “while attending New England Conservatory, he found himself immersed in a creative scene of like-minded musicians who channeled their love of a broad palette of genres into their musical language. After earning a Master’s degree at Rutgers University (M.M. in Jazz Performance), Curtis made his home in Brooklyn, New York, where he immediately immersed himself in the jazz, world, and experimental music scenes.”

composed/created music, at least in my head,” he validates, “even back when I was walking through the neighborhood delivering newspapers in my early teens. The challenge of being a good composer is to develop a system by which you can communicate what is in your head to other musicians and, ultimately the listener, whether that is through music notation or creating compositions in the studio, which much of my work is these days or graphic scores. Everybody has a different method of how they go about this – it is a composer’s life mission!”

He surmises about his own writing style, “I create music that I could imagine myself listening to and enjoying in a parallel universe. In our current universe, I hope that it will be enjoyed by accountants, ice sculptors, and food truck proprietors as well as fellow musicians. This particular project of mine doesn’t start off intended for live performance, but once I get the Curha-chestra together again, we will adapt some of it for those purposes.”

Musing about what makes his music fall into the category of jazz, he proposes, “Pretty much anything that is instrumental is considered jazz these days. If it is played by acoustic instruments, and there is any improvisation, then the jazz identifier kicks in even stronger. I really don’t think about it when I am composing, but I can imagine that to people that hear my music, they hear elements of jazz, even if it’s just some random weird chord or jagged melody.”

Hasselbring has pinpointed the style of jazz he composes, describing his sonic innovations as prog-surf trop-tronica. “I honestly try to avoid self-identifying my music with specific genres,” he confesses, “but ‘prog-surf trop-tronica’ seemed to include enough important elements of what I like and incorporate into my music.”

He perceives, “It also sounds a little ridiculous, and that appeals to me for some reason. I create music without thinking about what genre it will be, but people need some sort of descriptor to be drawn in, In a perfect world, it wouldn’t be necessary but I, for example, as a listener, would like to have some sort of frame of reference if I am going to check out something I have never heard before.”

Hasselbring offers audiences to hear his music freely on his website  https://www.curha.com/, and his Youtube channel  https://www.instagram.com/curtishasselbring/ , which he claims has been a resourceful tool for him. “The needs of the current industry,” he acknowledges, “have necessitated my creating a YouTube channel. That reminds me that I need to update it!”

Even when he is not working on his music, Hasselbring is consuming influences around him living in the present, which will at some point likely affect his music. He unveils about himself, “I am also an avid reader these days. It was jazz biographies and then post-punk history, and now I am starting in on early American history. My other big time-consuming hobby is that I also love to learn guitar parts from classic recordings, whether it be Frank Zappa solos or guitar music from Angola.”

Inspired by fellow musicians regardless of their pedigree or prestige, Curtis Hasselbring has created a vehicle by which his doodles on the trombone and guitar, and exchanging those communications with other musicians, can be put into physical form through Curha-chestra’s recordings. The continual rotation of musicians in Curha-chestra allows his compositions to continual change while always sounding contemporary by musicians who live in the present.