Diane Delin: Looking To The Past To Pilot the Future At the age of 80, Chicago-based jazz pianist Jodie Christian passed away in 2012. Still, his contributions continue to surface in the souls he immeasurably touched, like composer/violinist Diane Delin. Her CD Chicago Standard Time presents five tracks she recorded with Christian years before his passing. A testament to the ageless quality of jazz, their music are as fresh sounding as if they were recorded yesterday.

She characterizes the release, “This recording was made decades ago but never released, and I rediscovered it cleaning out my studio during the pandemic. I felt like the pandemic encouraged me to reflect upon the relationships that are and have been important in my life, and I valued Jodie deeply. So I released this to give him a bow of respect and gratitude for the chapter of my life when we worked a lot together.”

“I chose the title,” she advances, “because this is basically a release of standards with the exception of one of my own in standard form. Jodie’s playing embodied the blues-infused style of Chicago jazz of his generation that so many of us learned from.”

Delin explains how she and Christian began recording together. “I met Jodie in the late 1980s in the clubs in Chicago. We started playing together in the clubs and did some concert touring. I was pretty young and trying to figure out life, and he had a rich history of which I was in awe.”

She remembers fondly, “He was always so respectful and supportive, and became a friend. We just treated this recording like going to a gig, walking in, playing, and having fun. By the time Jodie passed away, I had already recorded several other projects and worked steadily with pianist Dennis Luxion for many years.”

She was afforded a lengthy period of introspection during the shutdowns due to COVID-19. She started reviewing her past and discovered a fresh impetus to exercise her creative impulse. “This project was recorded live, without overdubs,” she provides. “I have always felt that the best recordings come from playing together with open interaction, as we would have in live performance.”

Immortalized on the recording is her and Christian’s emotionally moving rendition of “God Bless the Child,” a timeless classic 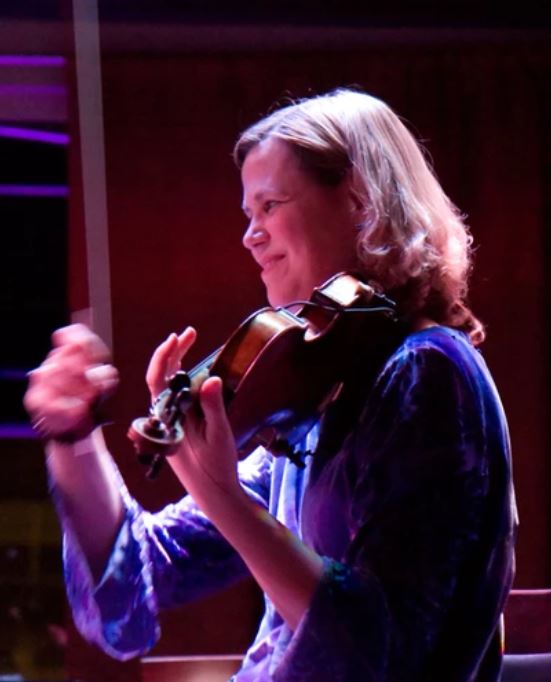 written by Billie Holiday and Arthur Herzog. Delin relishes, “‘God Bless the Child’ is an iconic song that has always spoken to me, not only for its lyrics but for the melody. We decided during the recording process in the studio that the best way to convey the meaning of the lyrics in a non-verbal way was to approach the song as a duet and rubato ballad for the greatest expression of its message.”

Also performing on the recording are Kelly Sill on bass and Steve Davis on drums. “They’re both great musicians,” Delin compliments cheerfully. Their contributions can be heard in the backdrop, forming a firm foundation that acts as a springboard for Christian’s and Delin’s imaginative improvisations as they create warm, frothy swirls across George and Ira Gershwin’s iconic tune “They Can’t Take That Away From Me” and smooth gyrations glinting along “For the Moment.”

“I don’t remember any challenges,” she admits about the recording process. “I do remember that Jodie had worked late the evening before and nodded off at the piano between tunes at one point. We nudged him, and he returned fully focused. I tell my students that you have to have excess, more than what the situation asks for, for the times when you are tired, jet-lagged, distracted, or uncomfortable in a situation. Jodie had that. The music was in his bones.”

Delin shares this quality with Christian, having music in her bones. “Music was always around me and in me,” she imparts. “I started piano lessons at age 6 and would change the melodies if I didn’t like them. Unfortunately, that didn’t go over too well with the teacher,” she notes.

“I grew up in a musical family,” she shares, “My grandmother played the violin for pleasure. My uncle was a professional violist, and everyone played at least one instrument, if not two. I was influenced by what was around me.”

Her yearning to write original scores also came to her early on as she recollects, “I also remember when I was maybe 10 years old hearing full symphonies in my head and wondering how I could possibly get them out on the paper. Of course, they were never realized, but as I grew, I was grateful to learn how to notate the music running in my head.” 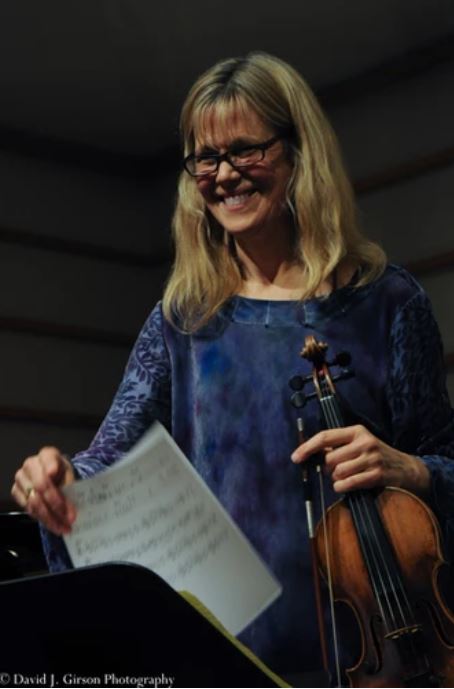 “To me,” she reflects, “composition has always been a natural component of my musical life. And at the same time, I’m not sure that I can always take credit for what I write. A piece can start playing in my head of its own accord without any conscious effort, sometimes so fully formed that I have to make sure I haven’t heard it somewhere else and that it’s truly new. Once that’s confirmed, it’s not until the notation process that I tweak it with conscious choices.”

“It’s like a partnership,” she describes. “And then there are also those times when I might have a deadline and have to approach the whole process more consciously, but, even then, I still ‘listen’ for that other input throughout.”

The partnership she imagined came to fruition while playing music employed with jazz idioms. “I love good music in all genres,” she maintains. “I became attracted to jazz because the improvisations and ensemble interactions are so spontaneous that any performance is always new.”

She examines, “The combination of rhythm, which is very visceral, with melody and new harmonic colors also caught my ear. I loved the interplay of the Bill Evans Village Vanguard sessions, and I used to listen in awe to Ella. I was inspired by the seeming connection between voice and violin; both have such capacity for nuance. I also found a magic in Miles’ cool period; note choice and placement, along with that beautiful tone and of course the musicians he worked with.”

The music of her past continues to influence her present-day creations. She recalls the motivation that set her on the path to playing 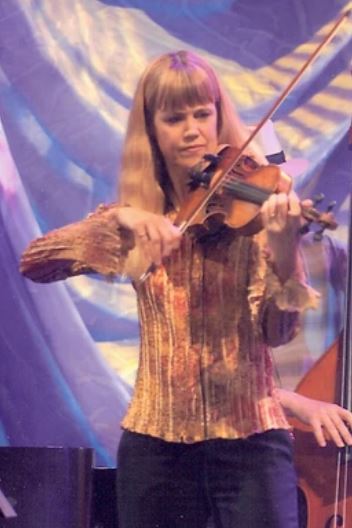 and making music, “I think probably one of the largest deciding factors was hearing live music. I grew up in Evanston, Illinois, at a time when a place called Amazing Grace Coffeehouse was presenting a wide range of national folk and jazz artists in a family environment. I went there as much as I could and sat as close to the stage as possible, just absorbing. I know that kids get to see a lot of videos these days, but nothing touches the energy and resonance of being present at a live performance. It was so inspiring to listen, absorb, and then go home and try to emulate.”

Attending live performances continues to excite her though her material with Jodie Christian is reaching audiences by other means. She regards, “We have been lucky to have received a lot of NPR radio play, international downloads, and streams including satellite radio. I am very grateful for the interest shown!”

Experiencing a demand for her music fuels her creative impulses to continue along her chosen path, as she reveals, “Since the recording of this project, I have released 5 other CDs with many of my own compositions. I have expanded over the years to include string writing with my jazz work.”

She singles out, “One of the projects I’m currently focused on is called Octagon. It’s a blending of a jazz quartet with a string quartet. Much of the music is mine; other pieces are written by pianist Dennis Luxion and several references or are arrangements of pre-existing classical pieces in a jazz/classical hybrid form. It’s an exciting project for me, not in only its music but in its ability to create community partnerships. We are able to partner with a community orchestra’s string quartet, or as a residency project with a college string quartet culminating in presenting a concert with the jazz quartet.”

Besides making and playing music, Delin sets time aside to check out material from other artists. She considers, “I listen to music based upon my mood and focus. Right now, I’m in a period of writing, so I am not actively listening to other music unless it comes on in the car. I have a strong musical memory and don’t want to find that I’m writing something I’ve just heard. Prior to this, I went through a period of revisiting Impressionists, Bartok’s, Stravinsky’s, and Vince Mendoza’s orchestrations.”

“I am also lucky to hear a lot of newly released music that comes through Blujazz,” she credits, “being married to its president.”

“What attracts me to any music is its use of color, space, and rhythmic placement to achieve its intention,” she observes. “Less is more to me these days. I like to listen to those who choose the quintessential notes to express the most possible with the least number in doing so. And I like to hear improvisations that somehow reflect upon the intention of the piece.” 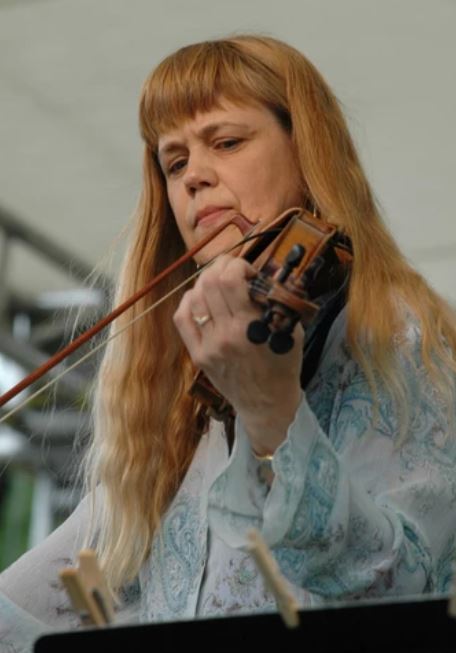 Becoming an educator is a natural extension for Delin, who has been an adjunct professor at Columbia College for a number of years. “I love teaching,” she enthuses, “and facilitating the process of experiential discovery as a route to self-discovery. It’s a partnership, with my taking cues from the student to help them find their own personal voice and way to express the uniqueness that they are.”

“The beauty of life,” she explores, “is how very different we are and how each of us has something new to say, create, contribute. It cuts to the essence of who we are as individuals, and ultimately, as a result, who we are collectively as a society. It has been a great honor in my life to be a part of this process in so many students’ lives throughout the years. I have taught at Columbia College Chicago for over 15 years, in addition to having had students of all ages in my private studio.”

“In addition to this,” she asserts, “I am fascinated by studying the wisdom that comes from indigenous cultures and am passionate about climate change prevention and caring for the Earth to reciprocate her support of us all.”