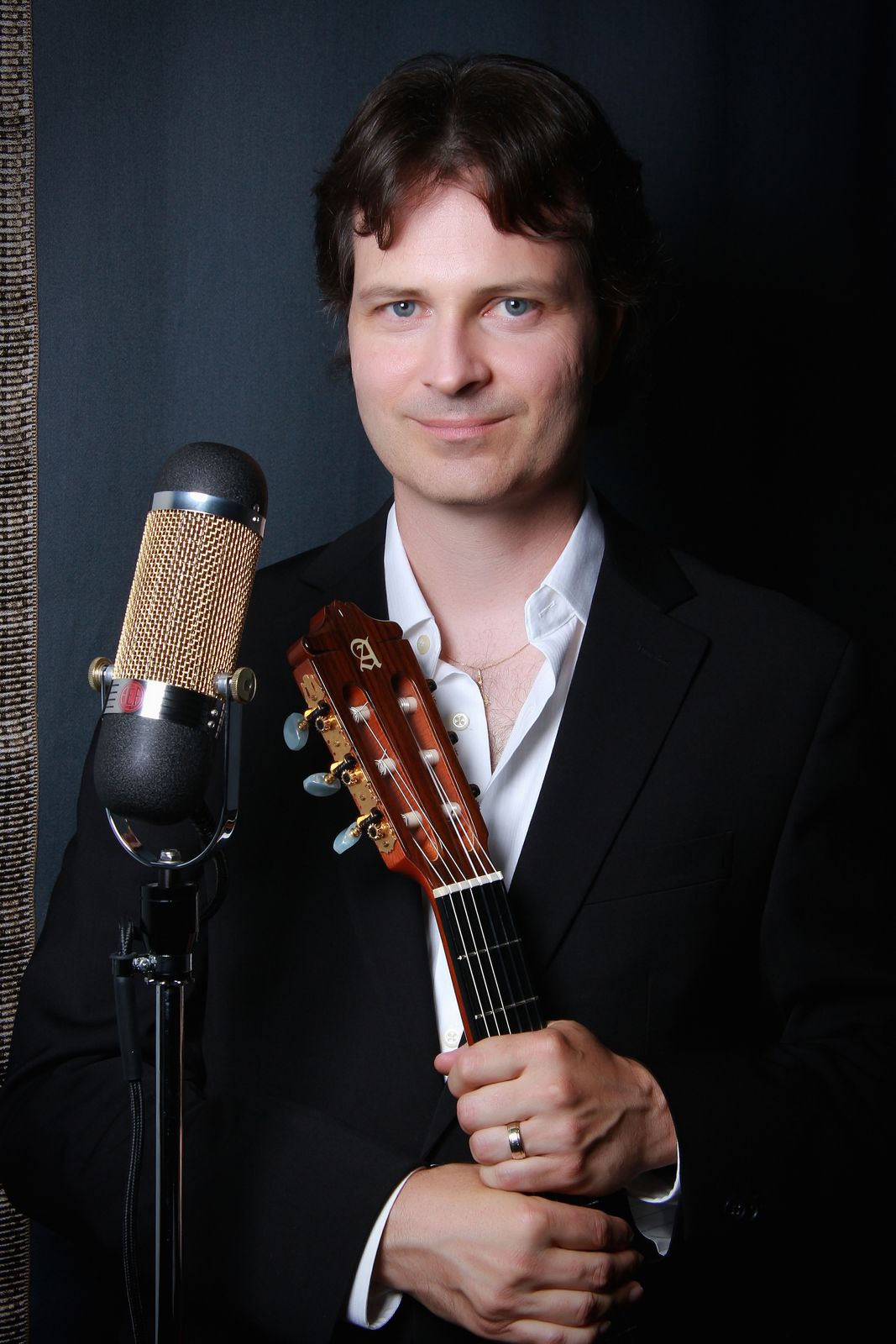 Multi-faceted guitarist Eddie Paton quickly discovered that the journey of a guitarist is never-ending.  The possibilities to structure chord arrangements and to improvise is infinite, certainly from his perspective.  As a solo artist, his debut release Solis demonstrates his talent to blend classical guitar with elements of rock, jazz fusion, flamenco, and electronica.  As a collaborator with his partner Bret Menezes, they form ReDuX:RMx and wrote a cinematic score for the Sea World show in Australia called Pirates Unleashed.  As an improviser, he is a member of the quintet Sultans of Strings led by violinist Chris McKhool where Paton exhibits his acumen for playing a menagerie of Latin and world music mixtures.

He notes, “I still often revisit many of the songs and artists I grew up with but love finding new music all the time too.”

He sheds light on some of his early musical influences, whose music is lodged in his memory, “Early influences included:  The Beatles, Simon & Garfunkel and The Who.”  He cites, “These artists are all great songwriters and I loved learning to play and sing along with their records strumming away on my classical guitar.”

“As I became more serious about my guitar studies,” he perceives, “I continued to try to absorb more stylistically different artists that all 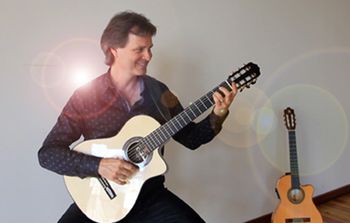 connected with me: Jimmy Page (Led Zeppelin) and Rik Emmett (Triumph) for their great orchestration of acoustic and electric guitars when recording; George Benson with his amazing chops and great sound; Nile Rodgers for his superbly funky and catchy rhythmic playing; classical guitarist legend John Williams; the amazing singing  and songwriting of Daryl Hall and Billy Joel.”

His attraction to the guitar began at the age of 11, according to the biography on his website (eddiepaton.com).  The attraction continued through high school and carried him into college.  He enumerates, “My earliest experiences included learning songs on my friend’s guitar, playing bass clarinet in Elementary school, taking piano lessons at first, and then starting on classical guitar at the Royal Conservatory of Music in Toronto.  I was lucky to have some positive and motivating teachers early on that encouraged a love of music.”

The lure of jazz was but one musical style that piqued his interest.  His exploration of musical styles introduced him to expressing his creativity in different ways on the guitar.  He reveals, “I’ve always been attracted to the idea of cross discipline learning, meaning a classical musician will benefit from learning a bit of jazz improvisation or a jazz musician can benefit from studying something of the structure and stylistic elements in performing classical compositions.”

He recalls about his early musical experiences, “In University, I was in a classical program but I also played in the jazz ensemble and loved the pulse and flow of the music and working on my improv skills.  I consider myself a ‘junior jazz’ musician but I try to use my basic understanding of jazz improv, chord structure and arranging to help improve my playing and writing.”

One vehicle that has enabled him to practice, explore, tweak, and fine-tune his guitar playing has been the Latin jazz quintet Sultans of String, helmed by violinist Chris McKhool.  He explains how he became involved with the Sultans, “I met [guitarist] Kevin Laliberté and played a few gigs with him first.  Eventually, I ended up subbing in for Kevin on a Sultans tour about 12 years ago and Chris asked me to join the band as a second guitarist after that tour.” 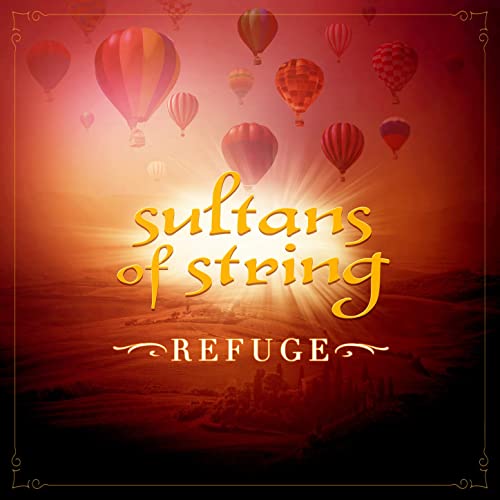 The quintet’s latest release Refuge celebrates the multiple contributions to music that artists of diverse backgrounds can and have offered.  Featuring over 30 guest musicians and vocalists who each add their individual talents to the recording, the CD gives audiences an awareness of the vital contributions that people, who are considered refugees, provide to the spectrum of world music.

Paton enlightens, “Refuge is very much Chris’ baby.  He had a definite vision for the project. I just tried to add a little bit of my playing style to the mix.”

He reflects about the recording experience, “I really enjoyed all the varied parts I was able to add to Refuge,” and muses, “I describe myself as a classically trained rock musician who plays Latin guitar for a living.  I believe I bring a funky driving element to the rhythm section [of the Sultans of String] and a bit of reckless abandon with my crazy jazz-rock, fusion-like solos.  Also,” he admits, “the Sultans are ‘gadget’ musicians and we all love using effects to create moods and textures.”

There is something going on with the Sultans of String that make playing live for the members even more special than collaborating in the studio as Paton describes, “Playing live with a great ensemble is always so exhilarating.  Part grooving and part listening and reacting to the other musicians.  Although I love being in a studio, live on stage is definitely my favourite place with the Sultans.”

Perhaps what keeps his contributions to the Sultans music fresh and inspiring is Paton’s inclination to dabble in musical projects outside of the quintet like his 2016 solo release Solis.  He considers, “As a guitarist and writer I like to jump around a lot stylistically.  A few years ago I felt like I had found my ‘voice’ as a player and writer and started working on Solis with my long time friend and musical collaborator Bret Menezes.”

“Solis,” he recollects, “combines many of the styles I love to play, and I’ve tried to pay tribute to them in my compositions; rumba flamenco, classical, bossa nova, funk, pop and Latin jazz.”

Another element blended into the mixture is electronica, which gives the tracks on Solis a cinematic and ambient vibe.  He examines, “Electronica is an integral part of the modern cinematic sound.  By using lush pads with many percussive rhythmic layers as an underpinning to my nylon and steel string guitar parts, I have tried to create a unique sound that is my own.”

“The greatest compliment I could hope for,” he declares sentimentally about Solis, “is that a few people make it a part of the soundtrack of their lives.”  Perhaps similarly to the effect that Paton’s early musical influences had on him.

Unwilling to end his discoveries as a guitarist, Paton shares  “I am working on a singer/songwriter album of original compositions, still mostly acoustic guitar driven with possibly a trio backing me up.  Also, I’m finishing recording an album with a Tex-Mex Mariachi band called Midnight Hombres.  I have a lot of instrumental arrangements of classic pop songs that I’d like to record in a Latin jazz and rumba style with electronica accompaniments.  I’ve started seriously studying classical guitar again for the first time in a couple of decades.  Lots ahead of me as I try my best to continue to learn and grow as a guitarist, singer, songwriter, composer and person.”

Paton’s journey as a guitarist continues to be never-ending.  His perspective that the musical possibilities to write, collaborate, and improvise on the guitar is infinite persists.  Whether working on a solo project or partnering with other musicians, Paton’s acumen as a versatile guitarist is inspiring.  His inclination to never stop learning from other artists has enabled him to widen his breadth as a guitarist and composer, making it possible for the veteran musician in him to continually learn from the student inside him.