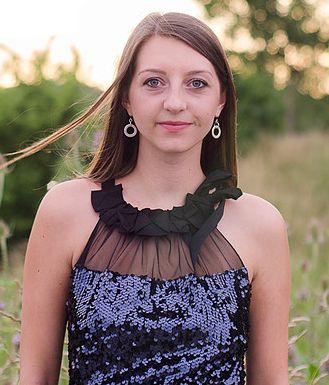 Classic jazz vocalists have often honed a stage presence that identifies them. For instance, part of Ella Fitzgerald’s stage presence was the elegant evening gowns that allowed every audience member to focus on her. Billie Holiday’s trademark was the white gardenia she wore in her hair at her shows. As for Rosemary Clooney, people remember the velvety red hue of the lipstick she wore that gave her a sultry appearance. Then there is Frank Sinatra, whose signature stage look was a black fedora slanted over his head and his neatly pressed jacket slung over his shoulder. These jazz vocalists had a stage persona that left a lasting imprint on their audiences and identified them through the ages.

The classic ideal audiences have of jazz vocalists having a stage presence continues today, evidenced by recording artist and live performer Aubrey Wilson. The native Canadian has fashioned a glamorous look for her stage presence that graces the cover of her debut CD Honeysuckle Rose. The glamorous facade amplifies her music, although, behind the scenes, Aubrey Wilson strips the image of a sophisticate and returns to being the girl-next-door.

“When I am on stage,” she admits, “I love to perform and engage with the audience. So I get dressed up and love to put on a good show! I had a fantastic group of local female entrepreneurs help me create the album artwork, and I couldn’t be happier with it. I wanted it to look dreamy and have the theme of honeysuckle rose throughout.”

Wilson regards, “I definitely feel like one of the guys, and I love that picture from our recording session,” she mentions referring to a photo on her website. “We are all sitting on a long bench listening back to the take we just recorded.” 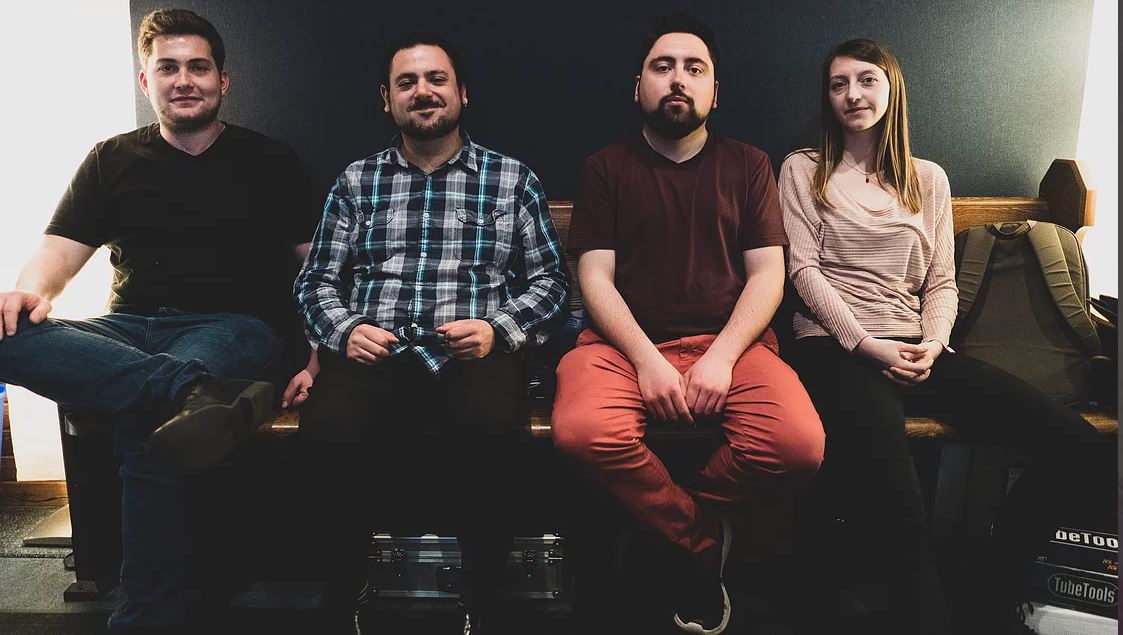 The musicians who collaborated with Wilson on Honeysuckle Rose are Chris Bruder on keyboards, Tom Altobelli on bass, and Sean Bruce Parker on drums. Together, they form the Aubrey Wilson Quartet. Wilson met her band members at Mohawk College’s Applied Music Program in Canada over a decade ago.

She touts, “I love my band. I feel like each musician brings something to this group that is unique and makes playing music together so fun and different each time. These guys are my friends and family. I met Chris, Tommy, and Sean at Mohawk College, and we really grew together as jazz musicians. I have complete trust in each of them when performing on stage. They push me to explore and improvise, which makes me a better musician.” 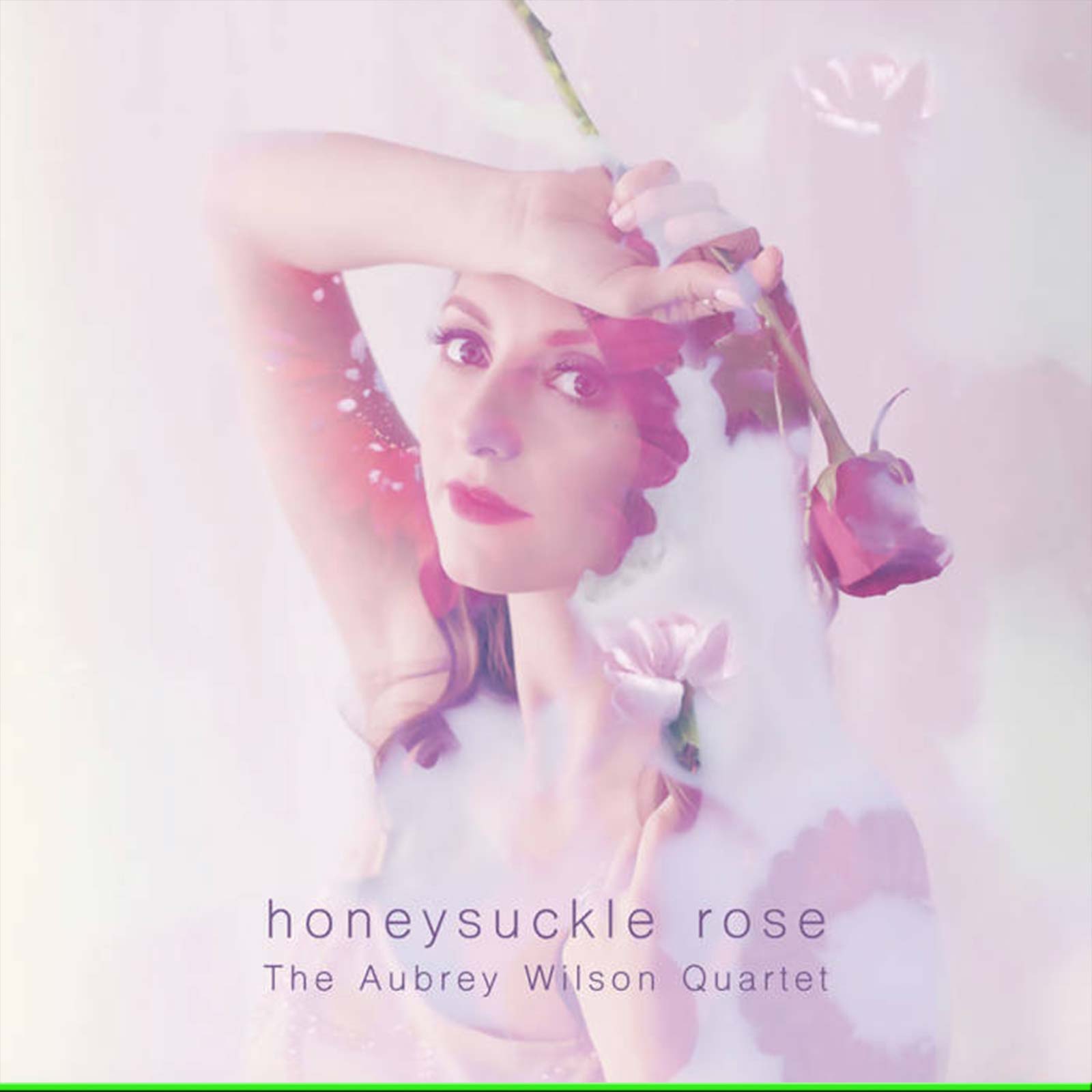 Exploring the quartet’s recording, she describes, “This album is the culmination of two years worth of arranging, rehearsing, and workshopping. After playing together for nearly a decade, we knew we wanted to create an album that audience members could take home with them. Every song on the album is arranged by members of our group. When Bruder brought his arrangement of ‘Honeysuckle Rose’ to the group, I knew I wanted to feature it as the title track of our album. It is beautiful and haunting and really showcases our sound as a band.”

Wilson discusses the track “I’m Gonna Sit Right Down and Write Myself a Letter” from Honeysuckle Rose and what attracted her to the song. “‘I’m Gonna Sit Right Down and Write Myself a Letter’ is a popular jazz standard written by Fred E. Ahlert and lyrics by Joe Young. My favourite version of this song is by Louis Armstrong. I love the story. It’s about wishing someone dear is still in your life, and the only way you can hear from them again is by writing yourself a letter and make-believing it came from them. I like to sing this song from a desperate kind of view. The arrangement is fun and funky, and I love that Tommy is featured on this song with his baseline and solo.” 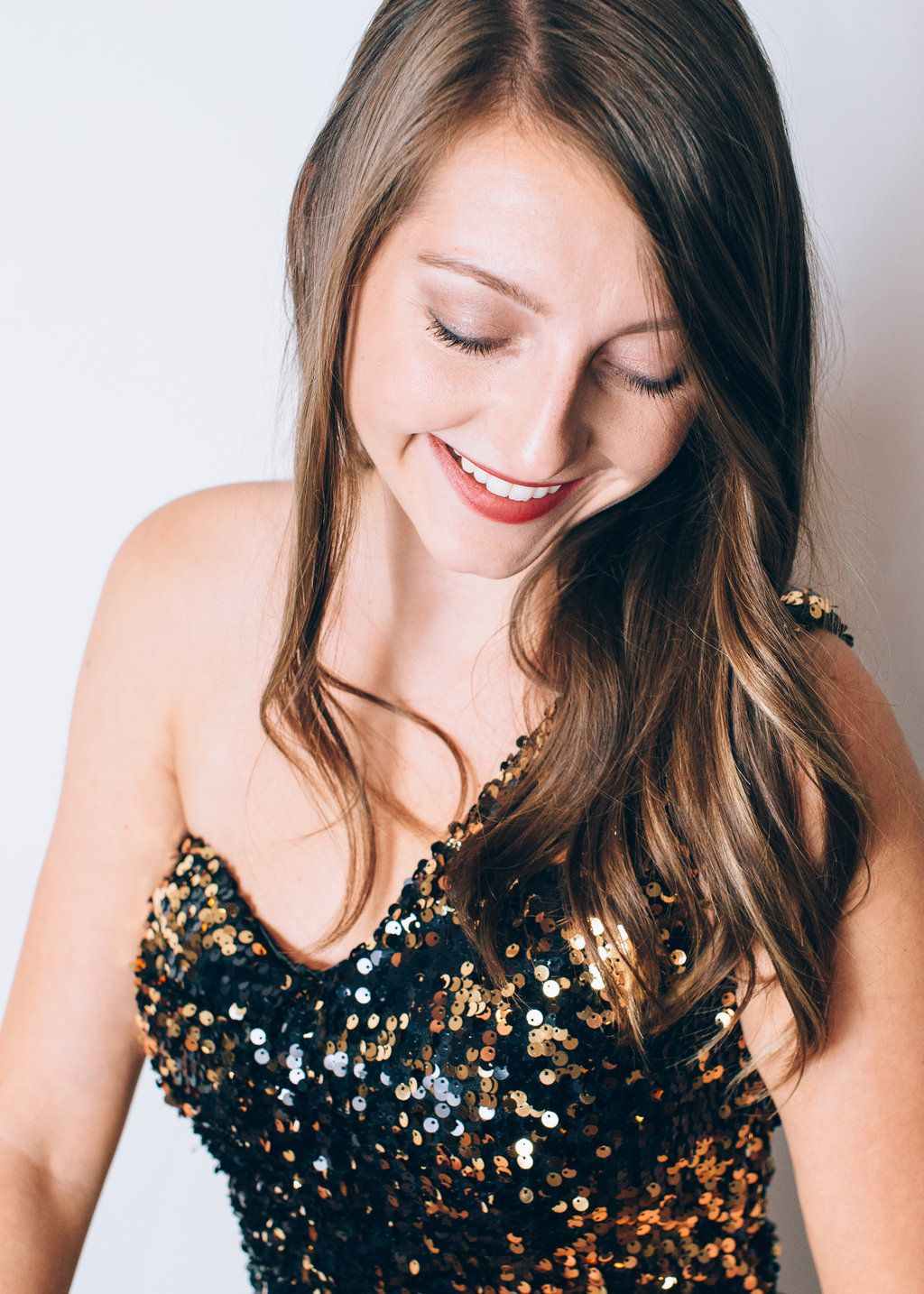 Joining Wilson’s quartet on their debut release is guitarist Scott Taplay who plays on the track “Nature Boy,” a jazz standard that never loses its appeal. Wilson shares, “It was Chris’s idea to feature an artist on ‘Nature Boy’ and ‘Honeysuckle Rose.’ I’ve played a few gigs with Scott Taplay and loved his style. He was a natural fit for these tunes, and I feel like he really demonstrates his impressive range of artistry on these two very different arrangements.”

Another guest musician on the recording is saxophonist Luis Deniz who plays on the track “Lullaby of the Leaves.” She praises, “Luis is a jazz musician I have admired for years. He performs with some of our favourite groups in Toronto. Our producer Dan Fortin wanted to feature a guest on the two swing songs’ Lullaby of the Leaves’ and ‘I Will Wait for You.’ He suggested Luis, and we all agreed! Luis rehearsed with us a few times and crushed it in the studio. Every take was great.”

In hindsight, Wilson considers, “I think making this record really helped me grow as a singer and musician. It took a lot of rehearsing, workshopping, and performing to get the songs ready to be recorded. I was able to help produce this album and learn about all the aspects of recording a jazz album. I also became a mother for the first time last year. Now when I perform, I can sing from a new perspective, and I think that really adds to my storytelling.”

Wilson speaks with a wisdom far beyond her age. Her attachment to the jazz repertoire runs deep to her core as she explains the allure of the musical style. “I love the lyrics and being able to tell a story when I sing. Jazz songs have beautiful lyrics, and I really feel I’m able to connect to them on an emotional level when I perform. I also feel like jazz tunes compliment my voice. Initially, Ella Fitzgerald, Sarah Vaughan, Louis Armstrong, and Peggy Lee turned me onto jazz, and I would try to copy and learn from each of their unique styles.”

Her decision to pursue the life of a recording artist and live performer has its roots in her upbringing. “My parents both really

encouraged me when it came to singing,” she recalls. “I performed song and dance when I was about 6 years old. My first performance was ‘The Dummy Song’ by Louis Armstrong. I have always loved singing and performing in both a lead vocalist setting as well as part of vocal groups and even backup!”

Another part of her education in jazz was learning from her father as she recollects, “When I was young, my father sang in a barbershop quartet that toured across Canada and the United States. I was able to accompany him and watch his performances of the jazz standards I love today! I also had lots of support from my family, who drove me to many singing competitions and open mics. I sang in my school’s musicals and solos at church. My whole life, I have been singing and performing.”

Advancing to her teenage years, she recounts, “When I was studying voice at Mohawk College, I had the opportunity to meet other jazz musicians who wanted to play with me. That was the start of The Aubrey Wilson Quartet.” 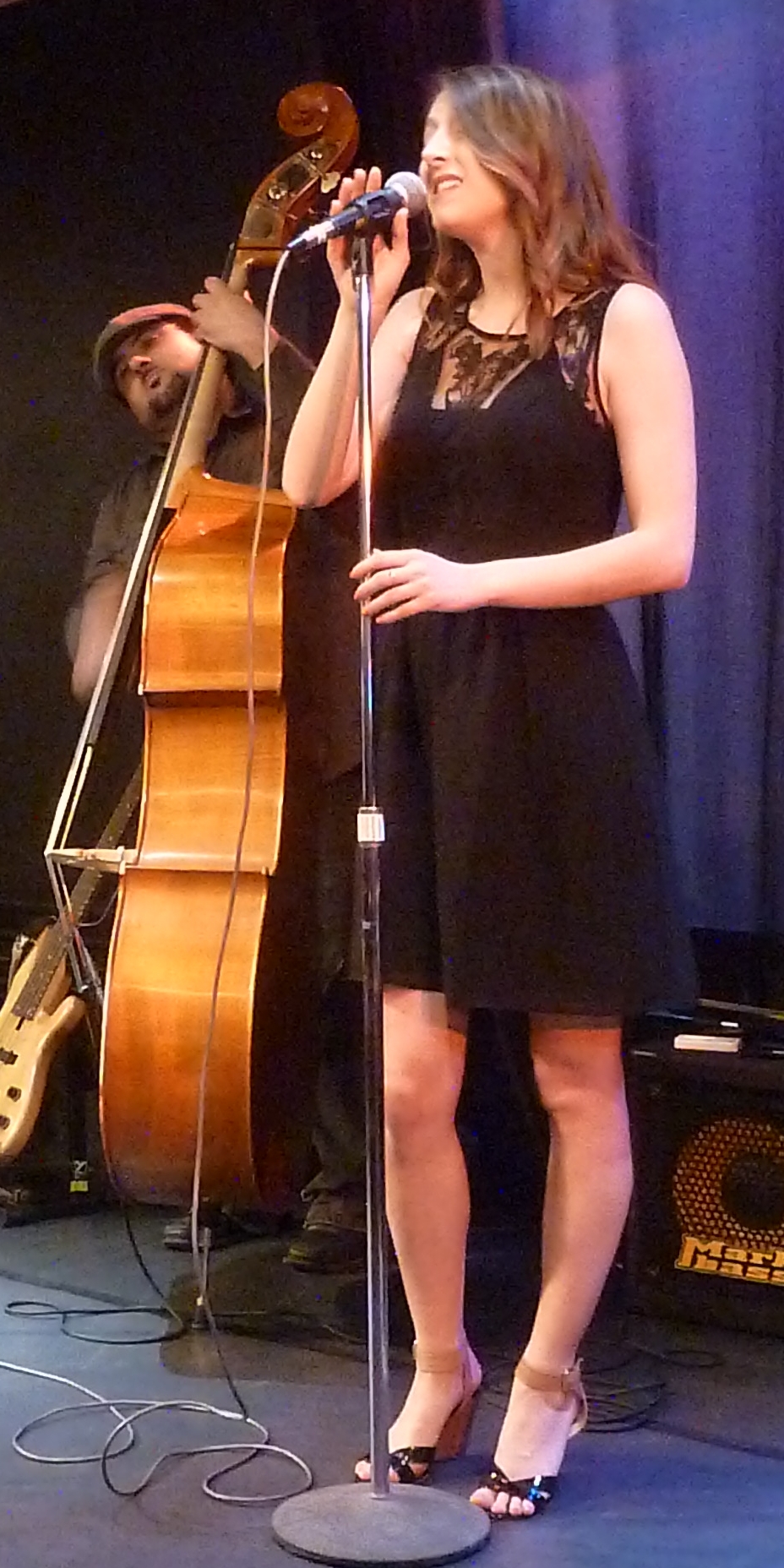 Today, the Aubrey Wilson Quartet is looking to taking their music to live audiences. She notes, “All of the songs on the album are ones we’ve been performing for years, and they represent us as a band. We recorded them to live off the floor at Canterbury Music Company in Toronto.”

“We recently had our first virtual gig,” she highlights, “where we were able to perform together from the safety of our own households. We played through all the songs with the same arrangements you hear on the album. Every time we perform together, we improvise, so the songs do still feel fresh and different each time.”

Looking to the future, Wilson claims that her band is ready for the live stage as she asserts, “We can’t wait to perform live again for our fans! Right now, in Ontario, we are still in lockdown, so virtual concerts are the way to go. We recently had an online concert that was a lot of fun. It was a great way to connect and perform again. We worked with a site called Syncspace, which allows us to play in real-time. Our debut album ‘Honeysuckle Rose’ is for sale on Bandcamp, and you can stream our music on all streaming platforms!”

In the vane of classic jazz vocalists, Aubrey Wilson has honed a glamorous stage presence that amplifies the beauty in the songs she sings. Yet, like her predecessors, she shares in the musical style’s allure, leaving a lasting impression on audiences and perhaps grooming an image that will identify her through the ages.