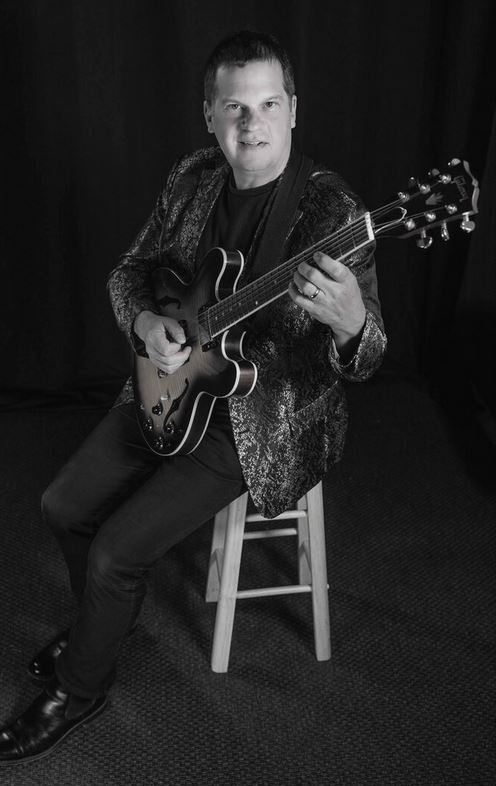 The BK Trio are pros at creating harmony in their dialogue, using the languages of blues, jazz, funk, soul, and swing.  Led by guitarist Brian Kooken, who is the BK in the BK Trio, he is joined by Greg Hatza on Hammond B3 organ and Robert Shahid on drums.  The three members met in Baltimore, Maryland.  After years of performing together, Kooken took the helm, composing the tracks on the trio’s debut release Hit It.

He recalls, “I met Greg Hatza at Towson University in Baltimore, Maryland, where I studied jazz improvisation with him.  Greg Hatza has been a part of the Baltimore music scene since the 1960s.”  He points out.  “He is a master at the Hammond B3 organ.  I have been playing in his group, The Greg Hatza Organization, as a sideman, since 2005.

He recounts, “I met Robert Shahid through playing in the GHO.  I wanted to form the BK Trio with Greg and Robert in order to play songs that had structure based on the 12 bar blues changes, with different styles to produce a groove-like feel.” 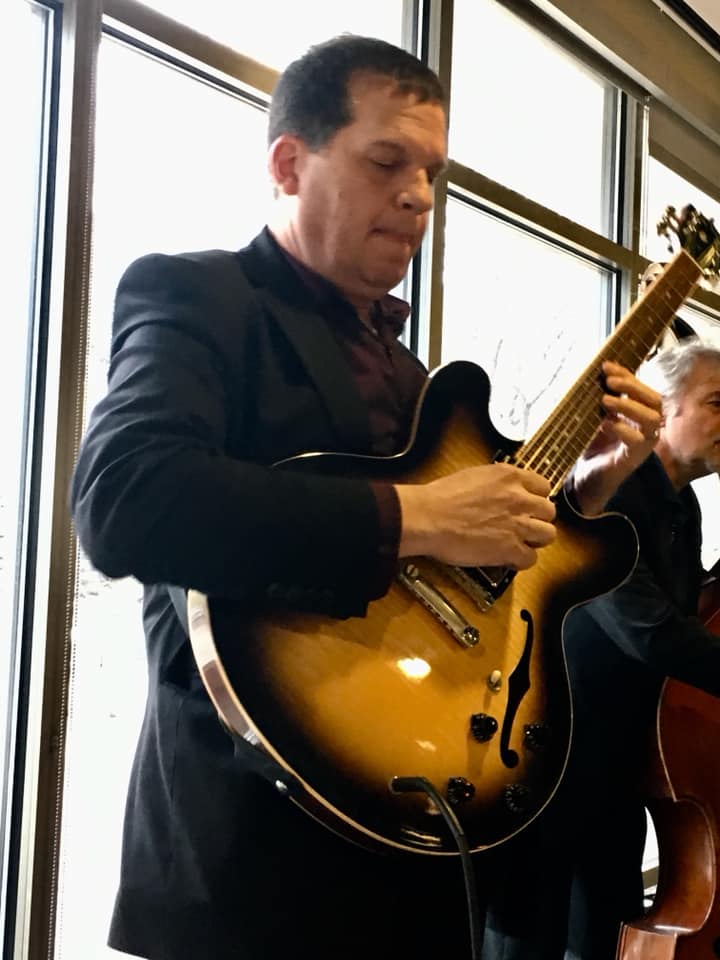 He shines the spotlight on his band mates with two tracks on Hit It, one titled “Hatza’s Groove” and the other being “Soul for Shahid.”  He notes about recording with his band mates, “Playing guitar in a group with organ has shaped my approach to how I comp with a group.  We play together but we don’t get in each other’s way.  It comes out as if it is written out.”

The harmony that the trio creates straddles the line between improvised phrasing and structured chord patterns.  To explain this phenomenon, Kooken imparts, “There are no wrong notes in playing the Blues.  I prefer the art form of the Blues because the Blues is all about the feel of the music.”

The feel of the music is a concept that audiences can pick up Kooken discovered from his musical influences, as he cites, “I was influenced by Andres Segovia, Jimi Hendrix, Charlie Byrd, and Joe Pass.  I admired how each guitarist could play flawlessly—never a wasted note.  I was always into any and every style of music.  To quote Duke Ellington, ‘There are two types of music—good and bad.  I like the good!’  Diversity is the key.  I am always open to hearing and learning new styles of music.”

He relishes, “I like listening to all styles of music, and while I am influenced by several—jazz, blues, funk, rock, folk, classical, Latin, flamenco, hip-hop, and go-go, it is impossible to narrow it down to a particular artist.  I am always trying to create my own, original sound.”

Kooken’s original sound is likely formed by his natural ability to hear a tune, whether it’s a folk song or a flamenco melody, and in his mind

interpret the chords with a bluesy intonation.  To see how he started on the course to finding his own original sound, audiences need to learn how he began playing the guitar.  He recollects, “I was introduced to the guitar by my father, Browne Lee Kooken, who was a guitarist himself.  As a small child, I would jump around when he played.  In 1975, he purchased a guitar for $32.00 from Woolworths, and gave it to me for my 11th birthday.  I’ve been playing ever since!”

The leap to composing original music soon followed as he reminisces, “I started composing in high school.  I wanted to be different from the other guitarists who would cover other people’s music.”

It is no surprise that he finds the writing process to be a chance to channel his creative energy.  “I love the process of composition,” he admits, “and following through by recording and live performance.

He prides, “Creating this CD allows me to share my music with others, especially during the pandemic, when we have been unable to perform live.”

Like the title of BK Trio’s album Hit It suggests, the band continues to push forward regardless of road blocks like COVID-19.  Kooken shares, “Funny story—The title for this album came from Greg Hatza.  I handed him a chart in the studio before I had decided on a name.  We played through the music before the engineer began recording.  All of a sudden, Greg said, ‘Come on, let’s hit it!’ He had such enthusiasm as he said it.  That is the approach to the album.”

He reveals, “My favorite track to record was ‘Brazilian Blues’.”  He remembers,”We did this in one take!  This was the first time we played this song together.  I thought it was the ultimate experience of recording.  I  wrote this song when I was traveling on a plane to Canada.  I usually have a music notebook and pencil when I am flying.  It is relaxing and rewarding to compose at 36,000 feet!”

Kooken’s purpose for releasing Hit It consists of more than making a hard copy of his original works, as he deduces, “My goal for HIT IT is to promote my original music through live gigs, and now, live stream gigs, radio and press interviews, and to sell my album through streaming channels or CDs.”

Making that press happen for BK Trio is left to Kooken as he examines, “I have to be responsible for booking and promoting the gig, and paying the band.  It is extremely difficult during the pandemic, as we have not been allowed to play live, and even as clubs open, many are at 50% capacity.”

Road blocks like the COVID-19 restrictions are nothing new to independent artists like the BK Trio who are pros at finding other routes around obstructions.  There is something to be said about creating harmony.  Once musicians set their minds on creating harmony, every step they take moves them towards greater harmony.  Similarly, once the BK Trio set their sights on making good music, there is only one way they can go.

Nice piece. I enjoy jazz, blues, and R&B
How about JJ Cale and the Tulsa sound. A mix of west Oklahoma country and Mississippi delta blues.