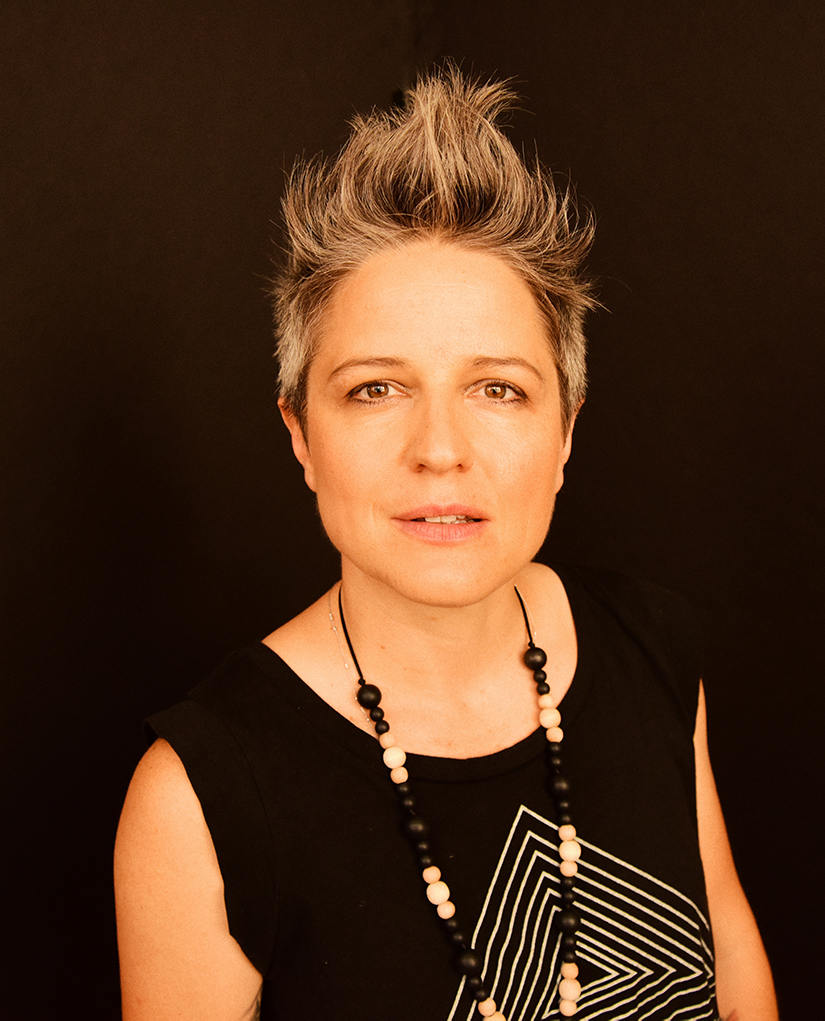 Traditionally, drums have been thought to require brawn and stamina, qualities that people attribute to the male gender.  However, a growing number of female students of music have discovered they have what it takes to play the drums, and contribute to the instrument’s vitality.  A course that New York-based drummer Allison Miller has chosen and never regretted taking.

Miller reflects about her formative years fondly, “I come from a musical family.  My mother is a pianist and choir director.  My father a sound engineer, and both my sisters played music growing up.  In fact, many of the women on my mother’s side of the family have been professional musicians.  So, naturally, music was just part of everyday life in the Miller household.  I don’t know WHAT exactly made me gravitate towards the drums, but I do know that DRUM was one of my first words, and my parents have always been supportive of my musical endeavors.  My mother taught me piano first and then let me play the drums.  I have been obsessed with rhythm and percussion ever since.”

The road set for her to explore the drums more deeply and writing music soon followed. “I started writing music in college,” she details, “but upon moving to New York City, at age 21, I found myself prioritizing my development as a player.  I put the pencil and manuscript away for about 7 years.  At age 28, after going through some trying personal times, original music just started pouring out of me.  Composing became therapeutic.”

Writing and playing that music would soon evolve, beckoning Miller to become a band leader. “Honestly,” she admits, “I had no intention of becoming a band leader, but I figured I might as well record all of this new music.   Next thing I know I’ve got Lenny White producing the recording.  Steve Wilson, Bruce Barth, Virginia Mayhew, and Ray Drummond joining me to make the music come alive.  And, what do you do after putting an album out? …tour it naturally.  This is how I started band leading and honing my band leading chops.  In 2007, I had another prolific writing period, which led to the formation of Boom Tic Boom.”

Her band Boom Tic Boom (BTB) is comprised of pianist Myra Melford, violinist Jenny Scheinmann, clarinetist Ben Goldberg, cornet player Kirk Knuffke, and bassist Todd Sickafoose.  She chronicles how she met her bandmates, “Myra and I met in 2003 while playing with Marty Ehrlich at The Jazz Standard in New York City.  This was our first time making music together and it felt sublime.  I knew from that moment on that I wanted to start a band centered around Myra’s creative spirit and fire.”

She recalls, “Jenny and I met even earlier at the Knitting Factory.  Since then we have been in multiple bands together, exploring improvisation in many genres.”

“Ben and I met through Todd Sickafoose,” she remembers, “although, we had known of each other for years and basically everyone in my 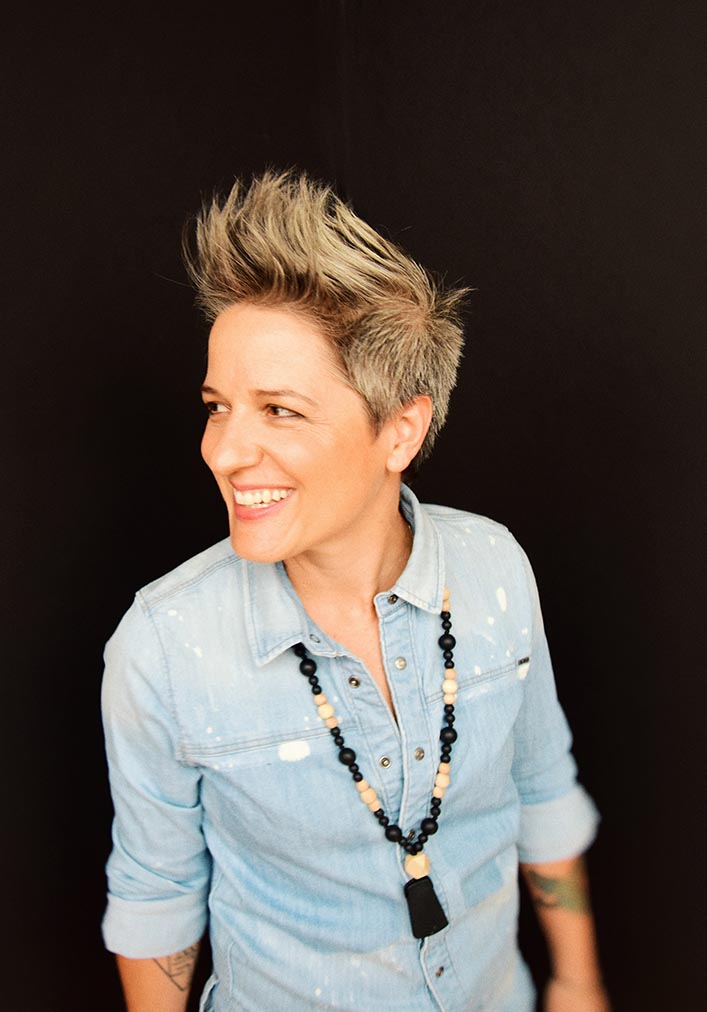 band kept telling me, ‘You and Ben HAVE to play together.’  I was already a fan of his work with Tin Hat trio.  I love his sound and the way it blends with cornet and violin.  Ben was the last member to join BTB but his voice is the sonic glue that has completed the band sound.”

Explaining further, she adds, “Kirk and I met through our pals Matt Wilson and Jeff Lederer.  Kirk speaks and sings through the cornet.  I brought him into the BTB fold initially to sub for Jenny but it quickly became clear that he would become an essential voice in the band.”

She praises, “Todd is my rhythmic partner, my rock, my protector.  We met though Jessica Lurie in 2004 at my dingy rehearsal space in Brooklyn.  We have since been a musical team playing on many albums together, touring with Ani DiFranco, Boom Tic Boom, Jessica Lurie, and Tiny Resistors…to name a few.”

Boom Tic Boom’s 2019 release Glitter Wolf honors the band’s openness and willingness to collectively negotiate through the songwriting process.  “Glitter Wolf is a celebration of the band and our 10 years together,” Miller espouses. “The music is inspired by my surroundings and personal and world events, but my biggest inspirations come from each member of the band and the commitment they have put towards the development of the band.  I feel like this is such a rarity in the current creative music world and I cherish the longevity of each creative relationship.”

She postulates, “Glitter Wolf focuses on groove, melody, the band sound, and the collective spirit.  While writing the music I made up a personal test of sorts.  Each composition had to pass the ‘goosebump’ test or it wouldn’t make the final album.  Basically, at some point, each piece had to give me shivers or goosebumps while listening.  I don’t know if my compositions move others, but I knew I didn’t want to release any music that didn’t move me.  This self-imposed test made the writing process difficult and shed light on some serious cruxes, but it has now become my new standard and I am grateful for it.  There is no denying a shiver.  It is involuntary.”

She proclaims, “As a drummer, this was the first BTB album that I was able to lose myself in the performance and have some serious fun playing the drums.  I felt completely present and in the moment.”

The track “Malaga” from the recording demonstrates Miller’s instinct to generate a strong rhythmic line. “My drum part is centered around the bassline,” she describes.  “I’m locking in with Todd first and, as the piece develops, I engage in rhythmic interplay with Jenny, Myra, Ben, and Kirk.  But my center is always focused around the bassline.  The composition, ‘Malaga,’ started with the bass line.  For much of the BTB music I liken the rhythmic interplay and arrangement style to that of a West African drum ensemble.  Each player has an individual rhythmic and melodic part, and together they lock in to bring the collective groove alive.”

Showcasing her versatility, Miller’s drumbeats display a relaxing throb in the track “The Phoenix,” a choice that she made to project a particular mood in the music.  “The drum part serves the composition and the music,” she asserts. “This piece was written for my friend’s kid Zev and fits his personality.  Sometimes I write music that doesn’t actually call for drums.  ‘Zev-The Phoenix’ isn’t exactly an example of that but I do think this piece would speak just as clearly without drums.  Myra’s part serves as the percussive train, moving the music forward.  My role was to provide a bed of whirling sound and feeling.

Another number, “Daughter and Sun,” exhibits BTB’s ability to collectively negotiate their parts along the melodic progressions.  “I instructed the band members to approach the performance of ‘Daughter and Sun’ with a light, swinging, playful feeling,” she notes.  “We discovered the arrangement together in rehearsal deciding, after trial and error, the transition from 4/4 swing to a 3/4 waltz would shine most brightly if we gradually slowed down.”

Miller points out, “Collective negotiations are pretty common for Boom Tic Boom.  Rehearsals, when we actually have them, proceed with an honest collective spirit.  During the solo section, I specifically instructed Ben and Kirk to approach their collective solo with a commitment to diatonic harmony.”

“My drum solo,” she deciphers, “serves as a connector between Kirk and Ben’s solo and the swinging, playful and frenetic energy of the A section.  As my friend and musical mate Tony Scherr once put it…”That is a classic Alli Miller ‘squeeze a drum solo out of a toothpaste tube’ drum solo. I hear drum solos as horn solos and I’m always searching for new ways to capture long tones, a lyrical feeling, and legato sounds on the kit.  I like it when my drum solos have a feeling of swaying in the wind.”

While exercising an openness and willingness to collectively negotiate the parts of each instrument, audiences need to wonder how does Miller know when a composition is finished.  “I put down the pencil,” she chortles. “If left with no deadlines I would probably continue to amend and tweak an arrangement until I suck the life out of the piece.  Seriously though, I rely on my bandmates to guide me in this process.  Sometimes it is unconscious.  I can just feel by their spirt and body language that the arrangement is right.  If I keep an open mind the music and my bandmates will let me know when the arrangement is ready.”

One track on the recording proved to need more attention than the others.  “‘White Wolf’ posed many challenges while writing,” she maintains.  “The A section just flowed out of me, but the B section took a long time to present itself.  I wrote MANY other B sections before I came to the one that stuck.”

BTB shows that being involved in open communication while writing produces meaningful compositions.  But how are the bandmates able to keep up that openness?  Miller reveals, “We are friends.  We are a musical family.  That is key.  I also make it a priority to feature every member of the band.  I am actively hearing the unique qualities of Myra, Jenny, Ben, Kirk and Todd while writing and I make sure to write sections that will truly feature each player.  Honestly, it would be a shame not to allow everyone to shine.   I feel honored to have leading voices of the creative music scene in my band.  It would be ridiculous to present them as ‘side musicians.’  Side musicians they are NOT.”

Not only have BTB proven to be excellent recording mates but they take that level of excellence into their live performance.  She supports, 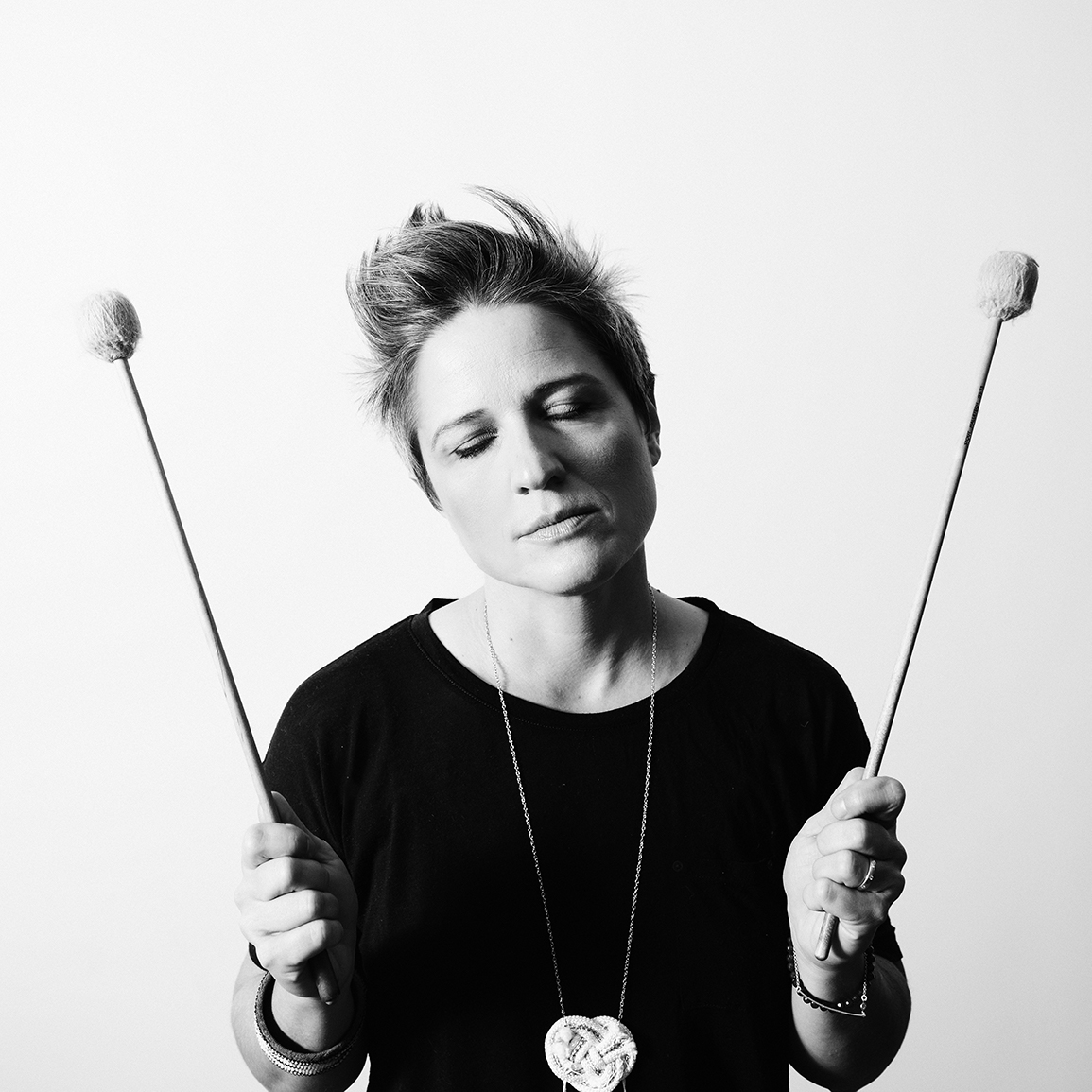 When asked if she had one wish, what would it be, her thoughts went straight to facilitating the band’s live shows, and she answered, “A tour bus!  I’ve got a big band!  And I’d love to bring a sound engineer out on the road with us.”

On the subject of audiences, she observes, “Audiences always vary from region to region.  I do find a similarity between European and West coast audiences.  The excitement is palpable, and these audiences listen with intention and focus.”

Miller exposes, “Next  January, I am premiering a new suite commissioned by the Mid-Atlantic Arts Foundation called In Our Veins: River and Social Change.  This multi-media piece will feature Boom Tic Boom, tap dancer Claudia Rahardjanoto, and film.”

Exhibiting all the qualities traditionally associated with playing the drums by serving as a connector between the other musicians, locking in with the bassline, and letting her bandmates guide her, Allison Miller is quite a unique drummer.  She contributes to the instrument’s vitality in ways that many before her may have never imagined.  Collective negotiations are the key to BTB’s magic to making music and taking that level of excellence to their live shows.